Whether you’ve decided to settle in Asia for good or are just visiting, as a foreigner in Asia, you will want to be as fully prepared for Asian culture as possible.

In particular, you’ll want to be prepared for the continent’s linguistic intricacies as well as the Asian words’ meaning behind some utterances which may have negative connotations when referring directly to you.

In this blog post, we explore five Asian words to call you a “foreigner” or “outsider”, as well as the connotations and meaning behind these words.

“Gaijin” (外人) is the Japanese word meaning “outsider” or “alien”. It is usually referred to Westerners who are not of Asian ethnicity. Other similar words for foreigners or foreign objects include “gaikoku” (外国) or “foreign country”, or “gaisha” (外車), which means “foreign car”.

Over the years, the term “gaijin” has developed and been used to refer to Western foreigners, but this word tends to lean on the cynical side and has negative connotations. It is therefore typically avoided by officials as well as by the Japanese media and broadcasters.

There are many professional sports players who, as foreigners in Asia, come to Japan to play sports such as baseball and professional wrestling. These foreigners are typically referred to as “gaikokujin” (外国人), which is translated into “foreign country” and “person” and since the Second World War, this term has been used as the official term for foreigners in Asia.

In Chinese, “ang mo” (紅毛) or “ang moh”, is a term that is literally translated as “red-haired person” and is used to describe white people of European origin.

You may also like:  Asia shows how different the beginning of the New Year can be!

It is commonly perceived by Caucasians as derogatory, although it is commonly used in some newspapers, film, and in television.

The word’s usage dates back to the 17th century Dutch East India Company’s presence in Asia, and has historical significance.

It is also used in a derogatory fashion to refer to Chinese people who cannot read Chinese, as they have been perceived as having abandoned their culture. 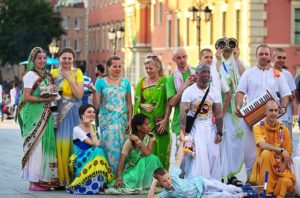 If you are Caucasian and of Western origins traveling to Indonesia and you hear the word “bule”, you should be aware that it means a “foreigner”, a “non-Indonesian national”, and is generally referred to describe white/Caucasian people.

Visiting street markets, you might find that street vendors call you “bule” to grab your attention, but since many Westerners find this term offensive, there’s been a development of simply being called “Mister” by these affable, enterprising individuals.

The etymology of the word “bule” can be traced back to the 19th century and possibly even earlier, and it was used to refer to the word “white” when describing buffalo. While there’s been progression in dictionaries since 1869, the word is also commonly used to refer to an albino person.

While its usage is widespread in South and South-East Asia, “farang” (ฝรั่ง) is a common Thai word to refer to white people, irrespective of their origin.

People of African origin are called “farang dam” (ฝรั่งดำ) or “black farang” to distinguish them from white people. This practice began during the Vietnam war when military bases were established and maintained in Thailand by the US.

You may also like:  Kokeshi Dolls - the story behind these small beauties

Today, this practice continues in the capital of Thailand, Bangkok.

In terms of etymology, “farang” has Persian origins, which refer to the Germanic tribes that ruled Western Europe.

There are several variations of the word “farang” to refer to Caucasian people and, in most cases, these are derogatory.

“Laowai” (老外) in Chinese is a term that’s used to describe foreigners of non-Asian origin and ethnicity.

It can be used to call foreigners such in affectionate ways.

However, during the period building up to and including the 2008 Beijing Olympics, there was a massive governmental drive to avoid the use of such terminology in official, media, and other communication to avoid offending visitors to the country.

Traveling to Asia can be a thoroughly enriching experience. From the Great Wall of China to the bustling cosmopolitan city of Tokyo, the plethora of Buddha statues and temples in Bangkok, or even the stunning beaches along Thailand’s coast, your experience in Asia is bound to leave you breathless.

Foreigners in Asia who immerse themselves in Asian culture will come out with a gentler, more open outlook on life.

However, if your stay is beyond a short holiday and you’re settling in Asia for good, you might start having some linguistic experiences, which are not always altogether pleasant.

This is because of the meaning behind Asian words when referring directly to you. In some cases, you’ll be called an “outsider”, “foreigner”, “white person” or others.

While these terms can be considered derogatory, and in some cases, offensive, if you approach your hosts and counterparts in the specific Asian country you’re in with respect and consideration, your experience will ultimately be meaningful and significant.

You may also like:  Why Japanese repair with gold?