After all, they each contain a subject, verb and an object.

But translating Korean isn’t as straightforward as it seems.

For example, the subject “Eva” in the first sentence ends in a vowel, while the object “John” ends in a consonant.
In addition, in Korean, the verb always comes at the end of a sentence.

So a seemingly straightforward translation of these two sentences can actually become something more complex that machine translations simply cannot pick up and a human touch is required.

In this blog post, we’ll provide some important translation insights that will help you with your Korean language translations.

The English language has definite and indefinite articles which indicate whether the noun is known to the reader or not.

For example, there’s a vast difference between the words “a banana” and “the banana”.

“A banana” is something abstract, a non-concrete term that could refer to any banana in the world.

However, “the banana” is the one you’re specifically referring to – it is known to you and might be in front of you or even in your hands.

In Korean, nouns are marked with the following markers: 이/가 and 은/는.

They appear at the end of the noun to indicate whether you’re speaking about an indefinite or a definite noun.

While the contrast between definite and indefinite articles mentioned above might seem uncomplicated, the situation with 이/가 and 은/는 becomes a bit more complex when describing a contrast in a sentence.

You may also like:  The hidden gems of the Vietnamese language

The general rule is that 이/가 is used for general statements, whereas 은/는 is used for contrast.

Here is one example of how to apply this.

The sentences “Eva dislikes John” and “John dislikes Eva” are general statements, so 이/가 will be used at the end of the nouns.

On the other hand, if the two sentences above changed slightly to “Eva dislikes John, but John dislikes Eva”, the ending of the nouns will contain the following Korean characters: 은/는. 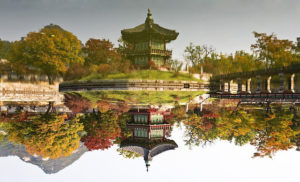 Another case where 이/가 and 은/는 come into play is when it comes to describing subjects or descriptions/actions.

Let’s take a closer look at this:

In the first Q&A, the question’s focus is on “who” is going to the shops, and the corresponding subject is “Eva”. That’s why 이/가 should be used there.

Meanwhile, in the second Q&A, the focus of the question is on the action being performed, so the corresponding participle should contain 은/는.

은/는 is used to show emphasis during a verb conjugation.

English auxiliary verbs like “can”, “will” or “should” help the main verb.

In a similar manner, 은/는 is used in the Korean language to help modify verbs.

In the middle of sentences

We come to the last part of using Korean language participles.

When there is the case of several simple sentences that you’d like to combine into a single sentence, remember to always use 이/가 in the middle to join them.

You may also like:  Exploring Japanese loanwords in English

Is it possible to automate email campaigns?

Email campaigns are becoming increasingly common in the business landscape with large, medium and small companies embarking on such campaigns to retain customers, offer promotions or inform clients of company developments.

But given the information that was discussed above, is it possible to automate email campaigns in Korea?

The short answer is that it would be a very difficult endeavour.

One of the first things that you will have to do is see whether the name of the person is in the subject of the sentence.

Then, you would need to determine whether the Korean name ends with a vowel or consonant.

Other factors to consider are the complexity of the email campaign’s subject lines, as well as the importance of verb conjugation.

Translating the Korean language – it’s not a straightforward affair

The Korean language has at least a thousand year old history.

While around 60% of the words come from Chinese, the Korean characters are very much different from those used in China.

Moreover, the Korean language is considered to be a language isolate, which means there is no other language that is similar to it in the world.

Translating Korean is no easy task and because of some of the cases with participles that were discussed above, machine translation can be a cumbersome and difficult task and can often lead to inaccuracies.

You may also like:  Konglish – another example of the vibrance of the “New Englishes”

This is why the quality human touch is vital for Korean translations.

Dialects – the riches of the Vietnamese treasure chest

Nikol Haytova
Est. reading time: 2 min 50 sec
We use cookies to ensure that we give you the best experience on our website. If you continue to use this site we will assume that you are happy with it.OkPrivacy policy