With the Golden Globes stepping off the stage for this year, you have probably started coming across the name “Parasite” quite often. This is because of the 6-times-nominated and, consequently awarded Korean production – Parasite. The film is the winner in the category for the best “Foreign Language Film”, which makes it the first Korean production to win the prestigious prize in the 77 years of history of the awards.
The movie and cinema communities have been booming with inside jokes, discussions, and commentaries on it but what is the movie really about and what does it owe its international success to?

The essence of the story

Okay now, no spoilers! The movie is an unpredictable story about the clash between the lives of the rich and the poor. It shows how the gaps between the classes in society often lead to the people of the bottom becoming ruthless in the fight of moving upwards in society. The indifference of the rich often has a cost itself – a cost sometimes too expensive even for them.

But even a plot so intriguing and moving needs a lot of work to be made global-public-friendly and the movie translation is the main detail in doing so!

What made “Parasite” so successful?

The film’s director and writer, Bong Joon-Ho, is an acclaimed movie maker not only in Korea but in Hollywood as well. There’s a unique trademark of his, where he manages to smoothly combine elements of comedy, romance, and thriller and create a wholesome and spellbinding piece.

How does Movie Translation work in Parasite? 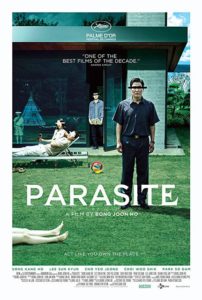 For the “Parasite” movie, Bong Joon-Ho chose his team very accurately and it shows. However, there is an important detail about the process of it all, which helped the movie gain all the global fame and recognition it enjoys nowadays. This is the movie translation and the making of the subtitles. Responsible for this great work is Bong Joon-Ho’s longtime partner – Darcy Pacquet. The duo has been working together since the early 2000s and their efforts result in amazing products comprehensively delivered to the foreign audience.

You may also like:  How to call a waiter in different countries in Asia

To make it closer to the non-Korean audience a lot of phrases have been played within the translation. For example, the Korean “jjappaguri” has been changed to “ram-don” and the Seoul National University documents with Oxford so the audience can create a proper image of how wealthy the family was. Darcy Pacquet and Joon-Ho changed a couple of the jokes in the movie as well. The original phrase “My name is Goo Soon-bum!” gets replaced with “Try learning English. It opens new doors.” Why? Bong Joon-Ho explains: “It’s just such a weird, not really funny instance of offbeat humor; it’s unfunny and corny in a very Korean way. So we changed the subtitles, and then he opens a door and jumps out of it.”

Bong Joon-Ho has acknowledged in many interviews the importance of subtitles and encourage viewers to not be afraid of subtitles, “Once you overcome the one-inch-tall barrier of subtitles, you will be introduced to so many more amazing films”

Some samples above were probably only a mere fraction of all the hard work behind the scenes. Thousands of hours were put into discussions between the director, screenwriter and the subtitle translator before it comes to those little lines for us to read, understand and enjoy the movie at its best even when we speak different languages and come from various cultural backgrounds. Movie translation is successful thanks to the ability to break the cultural and language barriers and this is all huge amounts of work.

Nikol Haytova
Est. reading time: 2 min 30 sec
We use cookies to ensure that we give you the best experience on our website. If you continue to use this site we will assume that you are happy with it.OkPrivacy policy