This directs us to the insight that dialects are the actual treasure in every language`s treasure chest. Today we are going to explore Vietnam`s riches and look into what makes Vietnamese dialects so colorful and special.

Vietnamese (tiếng Việt), formerly known as Annamese, is a member of the Mon-Khmer branch of the Austro-Asiatic language family. It is spoken by approximately 76 million people, which makes it the 16th most spoken language in the world. There are numerous dialects in the Vietnamese language system, but the natives state there are three main dialects used across the country. Regional characteristics have been taken into account, so we end up having Northern, Central and Southern Vietnamese dialects. Let us take a closer look!

The Northern Vietnamese accent is centered in Hanoi, the capital city of Vietnam. Because of the region it comes from it is often called “Hanoi Vietnamese”. Considered the official form of the Vietnamese language, it is distinguished by the use of all 6 tones (level, acute accent, grave accent, hook, tilde, and dot below). It can also be met in the provinces of Thanh Hoa, Nghe An, Ha Tinh. 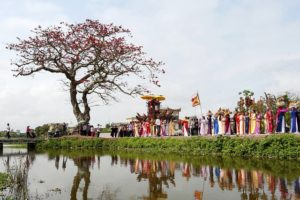 The Central Vietnamese dialect is centered in Hue, thus also called “Hue Vietnamese” (another name for it is “High Annamese”). This variety of the Vietnamese language is a combination of the Nghệ An dialect, which is incomprehensible to most outsiders, and the Hue dialect.

You may also like:  Manga - a creative way to learn Japanese in Indonesia

It is widely spoken in the provinces of Quang Binh, Quang Tri, Thua Thien Hue. What is interesting about this dialect is the fact that it reduces the number of tones to 5, and in some cases even to 4. Another distinctive feature of the Central Vietnamese accent is the use of a different set of particles and pronouns, making it stand out from the other vernacular forms of the Vietnamese language.

This dialect is territorially centered in the Ho Chi Min city and the Mekong Delta. It is often called “Saigon” or “Cochinchinese”. The Southern Vietnamese dialect also uses less tones but what makes it different than the other two is its diverse vocabulary.

It is common for Southern and Northern people to have problems understanding each other, but this is quickly overcome as they always find a common ground.

All of the Vietnamese accents and dialects use the same writing system, which is called Quoc-ngu. However, we can see that there are some drastic differences between dialects that are sometimes the cause of confusion between Vietnamese people.

The differences between the dialects mentioned above can be witnessed in numerous aspects. Those forms use a different number of tones and different vocabulary. Northerners speak with a higher-pitched, diverse accent, while Southerners speak in a more low-pitched and monotone accent, which is also found in the accents of aboriginal languages.

The Vietnamese language is so diverse that many linguists state that it is easy to conclude that there are as many dialects in Vietnam as there are towns and villages. To define them all is impossible and to try and standardize them is a crime.

You may also like:  Honorifics in Korea: language and culture explained

Translating “Eva dislikes John” and vice versa – how difficult could it be?

Nikol Haytova
Est. reading time: 2 min 50 sec
We use cookies to ensure that we give you the best experience on our website. If you continue to use this site we will assume that you are happy with it.OkPrivacy policy