When you’re in Asia as a foreigner, the main focus usually falls on the food. Asian cuisine is a masterful – as strange as it might sound, look or taste! What’s important, however, is not only to know the names of the dishes but to be acquainted with the dining etiquette in different Asian countries. How can you politely wish “good appetite” to someone in Korea? How can you eagerly express gratitude for the food in Japan? Let’s get right to it!

What do Japanese people say before or after a meal?

We’ll begin with the country of the rising sun! The word for “meal” in Japanese is gohan (ご飯). A traditional Japanese meal is a serving of plain white rice, along with a main dish, some side dishes, soup, and pickled vegetables. Before eating, Japanese people say “itadakimasu (いただきます),” a polite phrase meaning “I humbly receive this food”. This expresses thanks to whoever worked to prepare the meal. After eating, people once again express their thanks for the meal by saying “gochiso sama deshita (ごちそうさまでした)”, which literally means “it was quite a feast”. You’ll often see people bringing their palms together while saying those phrases – this is yet another way to show respect.

The Japanese phrases commonly used on the dining table. 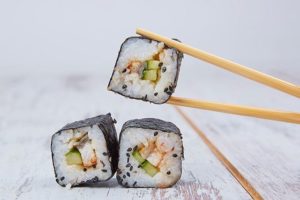 Oishii (美味しい) – “The food tastes delicious”. A great way to butter up the chef is to say this phrase mid-chew so that the people you’re eating with know just how much you’re enjoying the food.
Okawari (おかわり) means “More food, please”. The best time to say it is when you’d like another serving of a particular dish because you’re still hungry, or because you’ve found your new favorite Japanese food even though you’re stuffed.
Onaka ga ippai (お腹がいっぱい) means “I’m full.”

You may also like:  PARASITE - the translation work behind-the-scenes

What about Korea, the land of Kimchi?

If you are a fan of Asian cuisine you should definitely consider Korean food? Do you know how to eat it in the correct way? Let’s see. 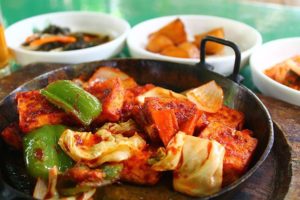 Korean society is polite; be appreciative and it will go a long way. If you feel confident in your Korean, you can say ‘jal meokkessumnida(잘 먹겠습니다)’ before the meal — similar to the Japanese ‘itadakimasu’, it roughly translates to ‘I will eat well’. After the meal, you can say ‘jal meogeosseumnida(잘 먹었습니다)’ to signal that you have indeed eaten well and are happy.

Other important details of Korean table etiquette include always using your utensils (meaning you shouldn’t touch food with your hands), and also showing respect for the elderly by always letting them start eating first.

What about chopsticks? Your chopsticks should be balanced on the edge of your plate when not in use; they should never rest on any dish during the meal. They definitely shouldn’t be stuck into your rice bowl, as this is thought to bring bad luck; it looks similar to Korean funeral rites, where sticks of incense are stuck vertically into the ground and burned.

How about Chinese Spinach Noodles or Fried Mashi? No doubt you’re well-acquainted with Chinese cuisine, but let’s check if you’re familiar with their table manners as well. 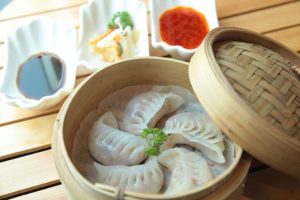 Did you know that Chinese people don’t usually say anything before digging in? I was surprised as well. However, if you still want to be polite and express it verbally, the typical phrase spoken when serving food is qǐng màn yòng (請慢用). It literally means “please eat slowly”, but is better translated as “enjoy your meal”, and serves the same function as the French ‘bon appétit’.
While there might not be many spoken gestures, you’d be wrong to conclude that there is no dining etiquette in China. You should always consider other people on the table and try your best to maintain the harmony between you. Chinese people don’t usually order food individually, they’d rather split everything on the table with their companions – so you would naturally need to concentrate on your food and your companions. Always let older people eat first and pick up your bowl with your thumb on the mouth of the bowl.

You may also like:  Asia on focus: Rainforest world music festival

Asian food culture offers foreigners a chance to not only try amazing cuisine but to also explore the deep meaning and subtle nuances that have been passed on from one generation to the next. Whether dining on sushi, honing your chopstick skills or drinking with friends, there is so much to learn. Now that you know the basics of some Asian countries’ dining etiquette, you can happily march into a Korean restaurant or just dig into some Chinese takeaway.

Desi Tzoneva
Est. reading time: 5 min 40 sec
We use cookies on our website to give you the most relevant experience by remembering your preferences and repeat visits. By clicking “Accept”, you consent to the use of ALL the cookies.
Privacy PolicyCookie settingsACCEPT
Manage consent