Asian languages are full of wonder. Every language is like an art. They have their own styles, writing systems, accents, local dialects and so on. In this article, we will talk about a national language not only used in its own country but also ranked as the sixth most spoken in the United States; Vietnamese.

Originally, Vietnamese was only an oral language. Until the 17th century, when the Latin alphabet was introduced by Roman Catholic missionaries which has been used since then.
We also cannot deny the fact that China had a strong influence in Asia which is why it has become the main source for loan words in Vietnamese. A lot of words commonly used nowadays are borrowed from Chinese or so-called Sino-Vietnamese which can often be seen in medicine, religion, science, and politics. A few examples are:

When it comes to technologies, you will find some English influenced words like TV ( tivi or TV, same as in English), e-mail, Internet (same as in English) while French plays its role in categories like food, fashion and toiletries ie. 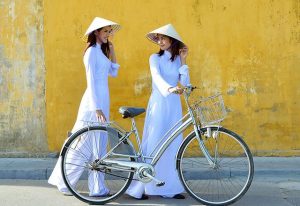 Unlike English where a word has the same meaning when you change the tone (except when it’s a question), in Vietnam, there are 6 different tones. It’s just like music to our ears. A change of tone will change the meaning of the word making it a challenge for non-native especially the Westerners to learn the language.

In comparison, Thai has five tones, four in Mandarin Chinese and nine in Cantonese. Besides the change of meaning, the different tone could reflect different intentions such as a plain informative sentence, a rhetorical question, an ironic statement and etc.

The Vietnamese language embraces influences from Latin, Chinese, French, and English. At the same time, it has six different tones. Although the language could be difficult for non-Vietnamese to grasp, Vietnamese is a fascinating language to learn as well as a potential market to expand your business. A team of professional native translators should take into account all the context, the speakers and the audience in their translation and localization work. This is essential in order to capture all the subtle emotions and intentions and meaning for an excellent end result.