June is hot and sunny and we are starting to think about vacations and beaches. And this is when, while staring at the bright blue sky, I got that small voice in my head saying “The Land of the Rising Sun”. While that expression itself has an interesting background story, I am going to leave it for another time. Working at 1-StopAsia lead me to think about how the sun was incorporated in the various Asian Cultures. Because we may call it Asia but there are so many countries and cultures nestled together in these 4 letters, sometimes it is hard to grasp the enormity of it.

The sun in Chinese culture is all the light and bright and good things you might imagine. One of the ways to say Sun in Chinese is 太陽 (Tàiyáng) and if you go into the details you will see the word “yáng” in it. It also refers to fire, Spring and East (because the sun rises from the East).

One of the most important figures in China that is related to the Sun is the Emperor. There are various cultural traditions when it comes to the Solar Eclipse – the ringing of the bells in temples to scare off a celestial dog, the belief that the Empress (the Moon) is too powerful and puts a shade on the light of the Emperor and many others.

On the other hand, you have probably heard that fair skin is an irreplaceable feature in the arsenal of a beautiful woman in China. Chinese women can go to extreme measures even at the beach to stay with fair skin.

You may also like:  A linguistic journey through Japanese restaurant culture

Where else should we go, if not in the Land of the Rising Sun.

The Sun is an iconic symbol for Japan and it is highly incorporated in their art. There is this story about the goddess of the sun Amaterasu from the Shinto religion, who is considered the founder of Japan, some 2700 years ago.

These two countries are only a small part of what can be written on the matter but let’s get one more look at something different than gods and emperors. A symbol that each country has, but in Asia a few have one and the same feature – the Sun. 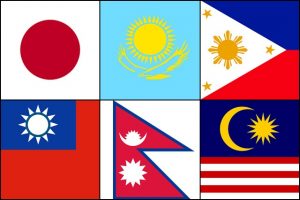 When I start looking at statistics where the flags of countries are shown, it always strikes me how many of the Asian countries have the sun depicted on their flag. They have their differences but it is still the sun. It is on the flag of the Republic of China (Taiwan), Kazakhstan, Kurdistan, Japan, Nepal, and a few others.

The topic about the Sun in different Asian cultures is endless. Right now, I started staring at the bright blue sky again… Bali comes to my mind, probably because it is one of the places where one can get some tan! Enjoy the summer!

You may also like:  Yuki Matsuri – the coolest festival in Japan!

Desi Tzoneva
Est. reading time: 5 min 40 sec
We use cookies on our website to give you the most relevant experience by remembering your preferences and repeat visits. By clicking “Accept”, you consent to the use of ALL the cookies.
Privacy PolicyCookie settingsACCEPT
Manage consent