A Synopsis of Mulan

Hua Mulan was a Chinese warrior woman who lived during the Northern and Southern dynasties (a period of time that took place between 420 and 589 A.D.) and her story was preserved throughout history and retold largely through the “Ballad of Mulan.” The first version of her story was written in the sixth century. In the original poem, Hua Mulan was sitting at her loom as the men in her family were asked to join the army in order to defend China. Because her brother is too young and she doesn’t want her old and sickly father to have to serve, she takes her father’s place in the army, with his and her mother’s blessing. While it’s certainly possible that she was a real person, it’s largely believed that her story is completely fictional.

Whether she was real or not doesn’t change the fact that movies and animated adaptations of that story have brought tons of profits for certain companies. The most famous one of them is the animated Mulan movie, released by Disney 1998. Due to its implementation of traditional folklore elements, the lighthearted approach to the story and the energetic and upbeat songs, it quickly became a favorite of kids worldwide, while managing to be highly regarded by adults as well.

As you may have noticed, Disney is on something of a streak lately, remaking some of it’s animated classics as live-action movies. It started with 2010’s Alice in Wonderland and has since continued by remaking some famous titles such as Cinderella, The Jungle Book, and The Beauty and the Beast. It shouldn’t be any surprise that the all-time favorite Mulan will soon be on that list.

You may also like:  Yuki Matsuri – the coolest festival in Japan!

The attempt to cast the ‘right’ characters 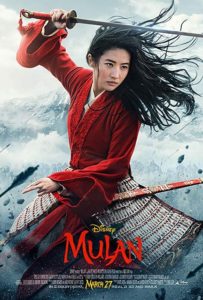 Following the announcement of the Mulan remake in 2015, a lot of different comments and opinions were quickly spread across the internet and social media. A great number of people expressed their concerns about Disney potentially “whitewashing” the movie by excluding Chinese actors from the cast. For their part, Disney surprised a lot of people by deliberately taking their time, traveling around more than five continents and auditing more than 1000 candidates. In the end, they chose the Chinese star Liu Yifei (also known as Crystal Liu) for the role of Hua Mulan. Fortunately, it turns out that almost the entire cast of the movie will be Chinese, with Chen Tang playing Yao, Jimmy Wong taking on the role of Ling, Doua Moua cast as Chein Po and Jet Li portraying the Emperor of China.

All of this sounds great, but some fans were still disturbed by some of the inaccuracies and slip-ups that happened during the production process. A good reason one can list as to why their concerns can be seen as valid is the team of writers behind the screenplay. Although all four writers Disney hired for this big project are all renowned and experienced, none of them are Asian. The director of the movie, New Zealander Nikki Caro, also lacks a connection to China. Such a team is seemingly destined to make mistakes or produce inaccuracies, like those shown in the Mulan trailer Disney launched in July. That trailer, in particular, has been widely criticized in China for featuring historical inaccuracies. Mulan was born in northern China around the 5th century A.D., while the trailer shows the main character and her family living in a round “tulou” house, described as a “traditional communal living structure of the Hakka people, unique to coastal, southern Fujian.” Since Mulan is from northern China, it’s unlikely her family would have been living in a home associated with the Hakka people. Additionally, the tulou house was seen during the Ming dynasty, set more than a thousand years after the time period which “Mulan” is meant to depict.

You may also like:  Similarities, despite the differences. What connects the East and the West?

Apart for the unsatisfying, yet acceptable fact that the movie is going to be voiced in English, Nikki Caro announced that the original songs from the 1998 Mulan would be omitted. The director is apparently trying to film the movie in a way that incorporates more action, and because of that a lot of key and iconic moments will have to be altered. No songs does mean that at the very least, the localization of the movie in different countries will be easier than it was for the classic animated movie.

Due to all of the unconfirmed information roaming around the web and the constantly changing release dates, fans around the world have continued to express their worries that by striving to cater to Western audiences, Disney might lose some of the authenticity of the story, making the film empty and unappealing. Whatever the result proves to be, the number of people waiting for the movie to premiere is growing every day, and it’s becoming pretty clear that China will be contributing millions to the box office in March 2020.