Indonesian (or Bahasa Indonesian) is the official language of Indonesia and the Indonesian archipelago. It is a relatively new language that has quickly taken its place in the rank as the 9th most spoken language in the world with more than 43 million native speakers.

1-StopAsia has introduced Indonesian to its clients a long time ago – not only as a service but as a piece of art and culture as well. Today, we want to introduce you to some interesting facts about this affirmed language that you might have not known about.

Indonesian is a successor of Malay

It is no wonder a lot of foreigners find so many similarities between Indonesian and Malay as Indonesian is a standardized variety of the latter. In fact, in the past when Indonesian lands have been occupied by European countries and trade had started to grow faster than ever, Malay was used as the lingua franca between those who did business in those lands.

In the early 20th century, while plotting on how to acquire independence from the Dutch, Indonesian nationalists took the decision that a new, refined language should be created using Malay as a base. They planned to use Bahasa Indonesian to unify more than 300 ethnic groups by making it an official language in the soon-to-be independent country. Did it work quite as it has been planned to, however?

Since introducing Indonesian as the new lingua franca on the archipelago, the language has undergone a lot of changes including its vocabulary being enriched. However, nowadays Indonesians rarely use the language in their daily lives. Indonesian is perceived as a means of communication in the official environment as it is considered by many to be stiff and rigid. A lot of people share that they often find using Bahasa Indonesian inadequate to express their needs and feelings.

You may also like:  Discovering Hmong: A language from a culturally and historically rich ethnic minority.

The language that had been created to break barriers had evolved to create a new one, becoming the language of the press and politicians instead of one of the people.

The Indonesian language has been strongly influenced by Arabic 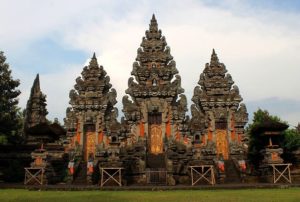 As you may know, Indonesia is the country with the greatest number of Muslims in the world. This fact makes it seem natural for Indonesians to have adopted a great deal of Arabic vocabulary. Most of the Arabic words that Indonesian language has borrowed, however, are connected to religion. A funny example is a fact that Indonesians call both the Jewish and Christian gods “Allah”, too.

Indonesians do not specify gender

Don’t get this wrong – it means that there are almost no grammatical genders. The Indonesian language rarely describes something as male or female. However, some words the language has borrowed come with their assigned gender. For example, there are no words such as “girlfriend” or “boyfriend” but there are “steward” and “stewardess”.

Duplication of sounds to describe items

A funny means of creating nouns, verbs, and adjectives in Indonesian language is to duplicate sounds. For example:

Learning the history of a language and how it has evolved is always important, but such small peculiarities are what help us dive into the culture and spirit of a language’s users. In this article, we’ve chosen only a few but in truth, there are a lot more nuances to see and understand, and they all apply to translation works and people who do them. The cultural diversity of a country is in fact expressed in its language or languages in that case.

You may also like:  The Joy and Benefits of Learning a Second Language

Dialects – the riches of the Vietnamese treasure chest

Translating “Eva dislikes John” and vice versa – how difficult could it be?

Desi Tzoneva
Est. reading time: 4 min
We use cookies to ensure that we give you the best experience on our website. If you continue to use this site we will assume that you are happy with it.OkPrivacy policy