As autumn is already knocking on our doors I come with an exquisite list of must-reads for those who consider themselves fans of Eastern culture.

How I discovered the Four Great Classics?

Recently I fell upon a very interesting Chinese classical novel. Water Margin (水浒传 in Simplified Chinese, 水滸傳 in Traditional Chinese) is the story of 108 outlaws and vagabonds enlisted by the government to fight foreign invaders, later sent to attack the southern emperor Fang La. Among the themes addressed in this novel are the abuse of power by officials, the unjust punishment of the loyal and the power of chivalry and loyalty – topics still very relevant nowadays, which surprised me as the novel was written in the 14th century. Much can also be learned from this piece about the customs and habits of the early Chinese people as well as their thought and belief systems. Personally, I view this piece as China’s answer to Robin Hood – ripe with folklore and cultural history, and yet addressing a lot of contemporary issues. When I dug into the origins of this novel I found that it has not only been adapted into vast arrays of rewrites, films, TV dramas, music, and operas but is also referred to as one of the Four Great Classic Novels of China (Chinese: 四大名著, four great masterworks).

What is the essence and importance of the Four Great Classic Novels of China? 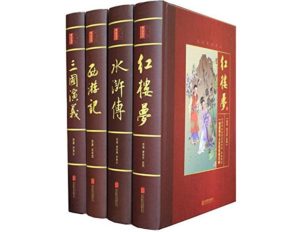 As I dug deeper, I started to realize that those novels actually gave the base for an entirely new genre in the East. Dating from the Ming and Qing dynasties (since the 14th century), these four novels are the bedrock of Chinese literary culture. The four works go chronologically as follows – Romance of the Three Kingdoms (14th century), Water Margin, Journey to the West (16th century), Dream of the Red Chamber (18th century). They are in no way linked but the writing styles are similar and curiosity for the new world is present. Their influence has spread across Asia to form elements of Japanese, Korean and South East Asian mythology. The writing and dissemination of these four works marked the emergence of the novel form in China as a counterpart to more refined philosophical and poetic works. The more expansive form of the novels allowed for a synthesis of the historical and mythological, whilst also developing along more accessible narrative lines. These four works also revealed the novel’s potential to embrace a multitude of perspectives, and to allow for irony; this permitted writers to voice previously suppressed critiques about the ruling order, whilst also expressing the vast multitude of voices which made up the Chinese populace.

You may also like:  Kawaii: the Japanese art of being "cute"

What is intriguing is that these novels marked a notable democratization of literature which is perhaps most evident in their use of vernacular Chinese, rather than the Classical Chinese. This is to be noted because the use of vernacular Chinese becomes more and more important with time. Written Vernacular Chinese refers to forms of written Chinese based on the vernacular language, in contrast to Classical Chinese. This written form was later refined by intellectuals associated with the May Fourth Movement. Since the early 1920s, this modern vernacular form has become the standard style of writing for speakers of all varieties of Chinese throughout mainland China, Taiwan, Malaysia, and Singapore as the written form of Modern Standard Chinese.

The recognition of the novels

The four novels were not recognized as pinnacles of literary achievement during their eras, as poetry had long dominated in China, while novels written in a pastiche of classical and vernacular Chinese were considered somewhat vulgar. But over time, they gained recognition as cornerstones of Chinese culture and with that they started appealing to millions worldwide. Today, the novels are translated in almost every language there is with tens of different translations only in English. For example, in different English adaptations, Water Margin is also known as Outlaws of the Marsh.

A recommendation on our behalf

Whatever the translation, however, I strongly advise you to prepare yourselves for the long rainy days by securing yourself with a couple of the Four Great Classic Novels of China. After all, as with Dante or Shakespeare in Europe, those four novels are the touchstones to which Chinese literary culture persistently returns to discover new relevance and fresh insight.

You may also like:  Asia on focus: A Story of The Chinese Dragon