If you are a fan of manga, anime or Japanese culture as a whole, then you know pretty well that kawaii is not just another Japanese loanword. Kawaii is an adjective, an expression, a statement and a style. A whole culture has been built on this term and today we are going to take a closer look into its aspects.

The etymology behind this cute word

It is said that the word originated from long ago during the Golden Age of Japan. The term is presumably derived from the word “kaohayushi” (かほはゆし), which was then used to describe instances such as somebody’s face being flushed with embarrassment.
Later, “kaohayushi” evolved to “kawayushi” (かわゆし), describing people or objects that are small, vulnerable pitiable or lovable. With society changing, the final form of the term now describes tiny, harmless and adorable people or objects.

The beginning of kawaii culture as we know it today dates back to the late 1960s. It is said that it all started during student protests where, as a form of displaying disagreement with authority, young people refused to visit lectures, reading manga instead.

A decade later a new adorable phenomenon took place – the “koneko-ji” (kitten writing). Young Japanese girls started a whole trend of “round writing” by starting to write horizontally instead of vertically, using a rounded, childlike font. The various decorations, smileys and symbols they used in this style made their handwriting almost incomprehensible, which is the reason why it was banned in many schools.

To conclude, the culture of kawaii was initially an act of defiance and the ultimate form of rebellion against stifling traditions and authority in Japanese culture.

You may also like:  Ikigai - the Japanese “reason for being” 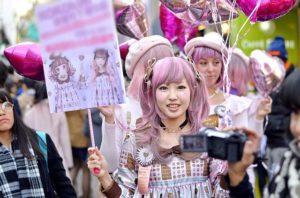 Nowadays you cannot stroll along a lively Japanese street without hearing a young girl frantically squeak “kawaii”. What might be the object of adoration? One never knows! It might be a cute pet or a pretty outfit, it might be an image or a whole person. This is why we say that kawaii can hardly be explained with a single definition.

However, it is important to note that kawaii does not only describe adorable objects or Japanese art such as manga and anime. In Japan, this style and line of behavior is also seen as the opposite of the over-sexualized femininity. In other words, it is an adorable way of resisting the adult world, denying society`s pressure.

How is it in the West?

As part of the 1990s spread of Japanese culture, kawaii became a new advertising and marketing instrument. Different companies worldwide started exploring cute as a strategy to increase their appeal. The Japanese Sony, Nintendo and Nissan opened the doors to the West so that Japanese art, film and music could triumph.

Today, kawaii plays a big role in our lives, whether we are conscious of it or not. It is in the emojis we use daily, the adorable images we come across online and the characters of almost all animated movies. What makes this concept so appealing is the fact that kawaii is for everyone, regardless of their age, gender or nationality.

Ikigai – the Japanese “reason for being”

Nikol Haytova
Est. reading time: 3 min 10 sec
We use cookies to ensure that we give you the best experience on our website. If you continue to use this site we will assume that you are happy with it.OkPrivacy policy