Almost every country has a holiday that celebrates children. Youngsters are a very important part of society and there are a lot of traditions all around the world linked to them. In Japan and Korea, however, Children’s day is more than just a day off – it is a reminder that children are the future of society, which is why they should be treated with unconditional love and respect. In this article, we are going to see why this holiday means so much for both Japanese and Koreans and also how it is celebrated.

In both countries, Children’s day is celebrated on the 5th of May. In Japan, the 5th day of the 5th month has been a celebration since ancient times. Children’s day in Japan was originally called Tango no Sekku (端午の節句), usually translated as Boys’ Day, celebrated as the opposite of Hina Matsuri (Girls’ day, taking place on the 3rd day of the 3rd month). In 1948 the name of the holiday was changed to Kodomo no Hi (こどもの日), which translates to Children’s day, to include both girls and boys in the official holiday.

Children’s day in Japan is the finale in a string of holidays called the Golden week. Since all of these celebrations are at the beginning of May, the weather is perfect for different outdoor activities and as a result that is when the population of Japan “awakes” and starts being more active.

Children’s day in Korea has a rather politically inclined history. The holiday was firstly celebrated in 1923 as a result of a students’ movement to draw attention to their status and improve their situation. One of the main faces of the movement was children’s book writer Dr. Bang Jung-Hwan, who first started using the modern word for kids in Korean eorini (어린이). People still find wisdom in his words:

You may also like:  How do Asians celebrate Christmas? 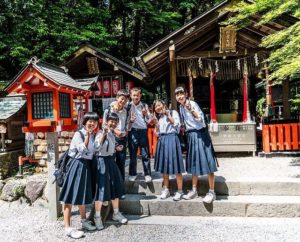 Historically, Japan also had an influence on the Korean festival. During the time Korea was under Japan’s rule, the Japanese tried to forbid this celebration as it could be used as a reason for activists to gather. However, the tradition remained and in 1945, after World War ll, the tradition was revived. In 1970 Children’s day in Korea was made an official holiday. Children’s day in Korea was initially taking place on the 1st of May but as it coincided with Labour day it was moved to the 5th of May.

Traditions. How do the countries celebrate?

In Japan, the holiday is still strongly associated with boys. A tradition that has remained from back then is for families that have a boy to fly carp streamers outside of their houses. Carp fish are believed to be strong and spirited fish that swim upstream and through powerful waterfalls. The carp or koi streamers also called Koinobori (鯉のぼり), symbolize the wish of the parents for their sons to become brave and strong.

Children’s day in Japan is usually accompanied by a lot of presents for the kids and various festivals. Places like museums, amusement parks, and zoos are very popular on this holiday. There are also some traditional dishes cooked specially for the celebration – mochigome, chimaki, and kashiwamochi.

You may also like:  What is the Asian version of Bon Appétit?

The 5th of May is an official holiday in Korea and that is why a lot of people associate it with a day off. It is a very important holiday for kids – as significant as Christmas is to other countries. It is a day that gives parents the chance to get off their busy jobs and spend time with their kids, show them they love them by giving presents and visiting special places together.

Important holidays and their role in business

At 1-StopAsia, we explore the peculiarities of Asian life and traditions for you – to show you the beautiful and meet you with the educational. Having such information, however, can greatly help you in your business approach as well. Asians usually receive a great amount of pleasure when foreigners take an interest in their important celebrations and such holidays might turn out to be a great chance for you to show you care. Also, it is good to be aware that such official holidays usually mean a day off for employees. Having that in mind can also save you some trouble.

Nikol Haytova
Est. reading time: 2 min 40 sec
We use cookies to ensure that we give you the best experience on our website. If you continue to use this site we will assume that you are happy with it.OkPrivacy policy