“What do you do? Do you stand up for your people’s history and culture and fight for the preservation of its values and beliefs?”

To protect an Indigenous language is to protect an entire culture. Throughout history, many people have been forced to abandon their mother tongue and even their culture due to the controversial and political demands of their state or government. For those who don’t know, an indigenous language is a language that is native to a region, spoken by people who originated from that area. Those people are referred to as Indigenous people, and many of those peoples’ original language is either extinct or very close to extinction.

Throughout time, a great deal of action has been taken to prevent both instances from happening. But in most cases, because of the lack of support, influence or power – either politically or financially – the voices of the people fighting for their cause were either not powerful enough or unheard, therefore resulting in the history of their people’s culture either being forgotten or unspoken of. In addition to that, a lot of people in history have kept silent and not fought to keep the language and culture of their people alive because of the fear of being chastised or mistreated by the people and government of their country.

About the Ainu Language

Take, for example, the Ainu language – a language with 22 different dialects that originated from the Ainu people – a group indigenous to a northeastern island in Japan, called Hokkaido. There is estimated to be around 24,000 Ainu who are currently living in Japan. But many of them deny their roots out of fear of discrimination or being treated a certain way.

You may also like:  Translating "Eva dislikes John" and vice versa - how difficult could it be? 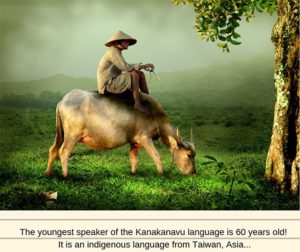 When it comes down to it, situations like that really test you. I mean – what do you do? Do you stand up for your people’s history and culture and fight for the preservation of its values and beliefs? Or, in order to be accepted by society – do you give up speaking your people’s tongue and practicing their religion and customs by becoming integrated into the common language and culture of the day?

The overwhelmingly strong pressure and influence of a country’s language and culture can easily drown out the attempts and drive of people who may want to take a stand to preserve the indigenous culture and language of their people. The undeniable temptation of just wanting to fit in with everyone else is a strong enough reason that most people won’t even try.

Who are the Kanakanavu People

As of now, there is estimated to be about 10 remaining speakers of the Kanakanavu language – a language spoken by the Kanakanavu People; an indigenous people of central southern Taiwan made up of the two villages of Manga and Takanua in Namaxia District, Kaohsiung. This is an example of an indigenous language that will soon be extinct unless it begins to be taught – which is not being done’, according to 80-year-old Mu’u Ka’angenaone, one of the Kanakanavu people’s remaining speakers of the language. And something to think about – the youngest speaker of the language is 60 years old.

With easy access to the internet and social media – now, more than ever is the easiest time for anyone to globally express an opinion and fight for a cause that they believe in. There’s literally no limit to the connections that you can make, the support you can receive, and the possibilities of change that can occur because of your effort and worldwide exposure.

You may also like:  The secrets of Thai language