While known for its anime, sushi vending machines, punctual public transport system, as well as other cultural aspects, Japan is an interesting country and other less known aspects about its culture are well worth exploring. One such Japanese cultural aspect is what is known as the Kokeshi Doll. But what is it and what does it represent? We take a closer look at this below.

Kokeshi Dolls originated centuries ago in Japan when wood craftsmen would make children’s toys from the leftover wood after making plates and bowls. They would go to onsen, or hot springs, where farmers from nearby areas would come to rest. Eventually, the purchasing of Kokeshi Dolls became so popular that there was a decision made at the All-Japan Kokeshi Exhibition in 1940 which decided on the name “Kokeshi” and it has been used as the common name for them ever since.

There are several outgrowths of the Kokeshi Doll style, each depending on the artist and the region where they are from. Ultimately, however, Kokeshi Dolls have a long, elongated body with no arms or legs, attached to a head. The entire doll is created out of wood and the body and face are both painted according to the artist’s style.

As with most things related to fashion, there are ebbs and flows that carry the popularity of an object forward, only to recede later on. The same is true for Kokeshi Dolls and they are now an increasing craze in Japan, especially among young women.

Japanese culture would not be the same without Kokeshi Dolls. But there are a dozen styles of them, so sometimes it’s hard to differentiate between them. Let’s take a look at some of these.

You may also like:  Japan and Korea – the different aspects of Children’s day

With their growing popularity, Kokeshi Dolls are used for a variety of purposes. These include: 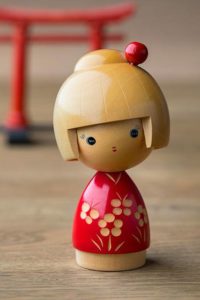 Children’s toys: Their traditional intention as children’s toys is still carried forward and Kokeshi Dolls can serve as lovely playthings for young children. Since they do not have small parts which are dangerous for digestion, they make for safe toys.

Good luck: Many people today believe that Kokeshi Dolls can bring good luck, and they are used as charms.

Collector’s pieces: Due to their exhibition at markets, Kokeshi Dolls have become collector’s pieces and many European tourists have collected them, adding them as ornaments to their homes.

Works of art: The variety of Kokeshi Doll artists and the multiple ways in which they’re created has created an artistic movement and some Kokeshi Dolls may be considered works of art.

To fully immerse yourself in Japanese culture means to experience all the cultural Japanese intricacies of this beautiful country. The Kokeshi dolls discussed above are some of the main cultural artefacts you’ll come across, and whether you purchase them for luck or to simply decorate your home, they’ll certainly make lovely additions to your interior decor as they serve as great works of art. Alternatively, give a Kokeshi Doll as a gift to a child. They’ll love the wooden toy as much as any other and will appreciate its uniqueness.

Nikol Haytova
Est. reading time: 2 min 30 sec
We use cookies on our website to give you the most relevant experience by remembering your preferences and repeat visits. By clicking “Accept”, you consent to the use of ALL the cookies.
Privacy PolicyCookie settingsACCEPT
Manage consent