The Philippines definitely sounds like an exotic holiday destination, as there’s a lot to discover in the archipelago’s nature and culture. What about their language practices? There are close to 190 languages and dialects in the Philippines archipelago, depending on the method of classification. Although the famous Tagalog is the language spoken in Manila and some nearby regions, the official languages are actually Filipino and English. Basically, Filipino’s foundation is Tagalog, but it also includes words from other Philippine languages, as well as borrowed words from English, Spanish, etc)

The official languages of the Philippines and their users
More than a quarter of the Philippines’ population speaks Filipino as their first language, and more than half of the population have it as their first or second one. Filipino is part of the Austronesian language family, and its complex verbal and grammatical systems are a result of it being influenced by languages such as Chinese, English, Spanish and even Arabic. Since the government made Filipino the official language, it’s the preferred language in schools, literature, news, and television.

As expected, in a country with a lot of different languages and dialects, they often get mixed by the population. Taglish is a language of its own that is a mix between Tagalog (the base, or “matrix” language) and English (the language inserted in the base language sentence). It should be noted that Taglish has its own grammatical rules. This is most apparent when an English word is conjugated using Tagalog affixes.

English
A: Where do you want to have lunch?
B: I want to try the food at the new restaurant.

You may also like:  6 facts about the Chinese language you've always wondered about

Is Filipino localization needed in the Philippines? 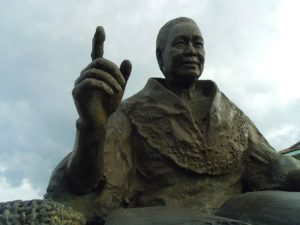 As we already said, although English is an official language and is commonly used in many instances, Filipinos still use Filipino in their daily lives. Filipinos share that Tagalog (and any other Philippine languages) seem quite unusual to them when used in electronic devices or services. ATM interfaces in the archipelago are in English, and so are all the road signs. Nonetheless, localization is needed. It’s a good practice, aimed at preserving the local language and at the part of the population that isn’t acquainted with the basics of English. If a market is aimed at as many Filipinos as possible, then it’s a good idea for them to localize.

A lot of translators working with Tagalog say that it’s a challenging language. Although it shares some similarities with English, it still has its own way to surprise you.

The Tagalog and English languages share an identical punctuation system and emphasize things in the same way, which makes translation seem like a walk in the park. However, although Tagalog possesses three genders (masculine, feminine and neutral), pronouns are not gender-assigned. The language uses the pronoun “siya” meaning “that person”, which completely eliminates the meaning of gender that you might have put in your English sentences. In addition to that, there are also a tremendous amount of Tagalog words that can’t be literally translated. For example, the word “kilig” refers to the giddy feeling a person experiences when he/she is happy or excited, usually because of something romantic. It’s the perfect description to what you feel when you see the person you like, or when you imagine meeting your favorite celebrity.

You may also like:  Trends On Asian Languages Translations Summary Till July 2018 – Part 2

Although some words may seem strange, unnatural or not understandable when translated to Filipino, it may sound too informal if too many words are left untranslated, which would make it sound more like Taglish. As translators, it’s also our role to carefully choose which words should be translated or not, to aid the readers’ understanding of the text. This is why, in order to become a translator with English and Tagalog, you’ll need to have in-depth knowledge of both languages, as well as a professional attitude and to have spent long years of practice in the area.

Yana Dinchiyska
Est. reading time: 2 min 30 sec
We use cookies to ensure that we give you the best experience on our website. If you continue to use this site we will assume that you are happy with it.OkPrivacy policy